And now the fire's the focus of the room
By winter made so. Like a gay salute
There crackles in the hearth
The holly's fusillade.
~ from Winter by Maurice Craig

May this season be full of love, merriment and comfort! Warm hearts & hearths to you and your loved ones, and many blessings in 2013!

interview with chief spence of the attawapiskat first nation

Attawapiskat First Nation Chief Theresa Spence has been on a hunger strike for over a week now. Her actions of protest are strongly linked to those of the Idle No More movement and she will continue her hunger strike until she has meetings with the provincial government, the prime minister and representatives from the crown. Watch the video below for an interview with Chief Spence and please send letters support for the First Nations people! 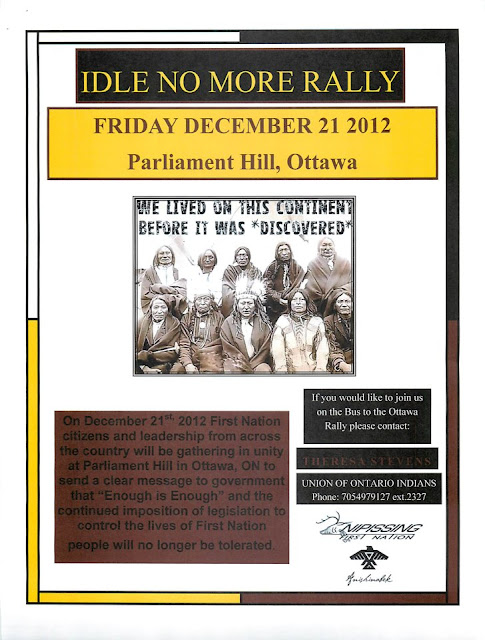 {From a letter by Nipissing First Nation & The Union of Ontario Indians}:

"On December 21st 2012 First Nations citizens and leadership from across the country will be gathering in unity at Parliament Hill in Ottawa, Ontarioto send a clear message to government that Enough is Enough and the continued imposition of legislation to control the lives of First Nation people will no longer be tolerated.

Nipissing First Nation and the Union of Ontario Indians have partnered and are strongly encouraged citizens and staff to attend this event."

Tonight {December 19th} there will be a information session and feast the North Bay Indian Friendship Centre to talk about the impact of Bill C-45. This event will be from 5pm to 7pm at 980 Cassells St in North Bay, and for more info you can check out the event's Facebook page.

On Friday December 21st there will be a bus from North Bay to the Ottawa rally, to reserve seating contact Theresa Stevens at (705) 497-9127 or at theresa.stevens@anishnawbek.ca.

Below is an outline of the Idle No More movement, copied from here:

"A rising movement is set to bring its message of Indigenous solidarity, and defense of Aboriginal rights, to the doorstep of Canada’s Conservative government.

Idle No More is a Grassroots movement opposed to unilateral federal government changes to legislation affecting the Indigenous (First Nations, Inuit and Métis) peoples. We are calling on all supporters, Native and Non-Native, Inuit, Métis, Chief & Councils, On-Reserve & and Off- Reserve citizens, to Rally together in Unity and Peace. We must raise awareness to all people of impending legislative changes, being pushed through parliament to become laws that will directly affect our people, lands, all creatures that depend and reside on it.

As The First People, of this land, we must stand up, and tell the government, “We will make the changes from here on out. This land we live on is ours. These Waters we depend on are ours. These changes are ours to make. We have the right to decide our future as a Nation, the future of the land and waters we live on.” We can no longer remain silent in the matters that involve us now, and the generations to come. Silence is considered consent by the Harper Agenda.

All of these Bills are in direct violation of Article 18, 19 & 20 of the United Nations Declaration on the Rights of Indigenous Peoples.

Everyone should seek support from their Band Councils and Chiefs for support in peacefully uniting to fight these violations of our Rights."

I figured that I would get this up before I start the whirlwind of cleaning, decorating and baking that needs to be done. This post is just to share some Yuletide recipes, ideas, going-ons and reading. Please feel free to share you own in the comment section!
For the last few years Midwinter and Christmas are mostlu secular celebrations for me, but I still do enjoy the season. The one real exception to this is a newly adopted tradition of making a Midwinter feast for Ancestors who are no longer here to sit at the table with us. Last year I was inspired by Ms Graveyard Dirt, who put out a Holy Supper Challenge and she is doing so again this year, which I recommend folks to join in!
This year for the Winter Solstice I will make offerings to a new deity that I am getting to know {a post about that still to come!} and start some heather seeds that I got from a lovely friend in Cornwall, on a recommendation found on the Alchemy Works website. I will also be keeping an eye on the illuminations of both New Grange and Maeshowe, which can be viewed on webcasts. And perhaps pining a wee bit that I will be missing the celebrations at the Kensington Market Festival of Lights.
I still haven't done any decorating, so one of the things that I have to do is deck my little Norfolk Island pine. Last year I cut out a bunch of woodland critters to put on it, which you can see more about here and perhaps gets some ideas. If you are looking for more Christmas tree ideas, you should go read Carolina Gonzalez's article A Very Magical Christmas Tree, her tree is fantastic!
There is plenty of cooking and baking to be done here yet, too. Here are a few recipes that I have enjoyed:
Maple Eggnog from Seasonal Ontario Food
Bourbon and Whiskey Balls from Poor Richard's Almanac
Medieval Gingerbread from Gode Cookery
Wassail from Gode Cookery
Christmas Cranberry Scones from Farmgirl Fare
Irish Cream Shortbread
Cider Loaf
Geimhread Gre {Winter Tea} from The Bare Footed Pavee
Yule Log from Epicurean
Pistachio Cardamom Shortbread from Dear Love Blog
Should you find some time for reading, here are links to posts and articles that you might find interesting:
Yuletide Traditions: Magic, Divination and Superstitions
Yuletide Traditions: Greenery and Decorations
Merry Celtmas from Three Shouts on a Hilltop
Yule & Hogmanay Part 1 and Part 2 from Tairis
And should you have even more spare time, here is a great movie called Mummers, Masks and Mischief about mummering and guising in Ireland.

a great new steader book & a pile of awesome giveaways!

You need to get your entries in by December 18th! On the 18th there will be a live chat on the Backyard Farming Facebook page between 7:30 pm to 8:30 pm CMT, where the winners will be announced. Head on over to enter and make sure to check out the book!