Things at the new stead were messed up for a bit due to a flood we had. The guy who installed the new bathtub forgot to do something with the flood guard {sorry folks, a plumber I am not} and a whole bunch of water ended up going through to the two floors below. Our landlord is great and got on it right away though. The issue was fixed and some more renos had to be done to make sure there would be no mold in the future. Bubble baths are now safe. :D

Speaking of water, our new home is right by the lake and there is a public beach is just around the corner. 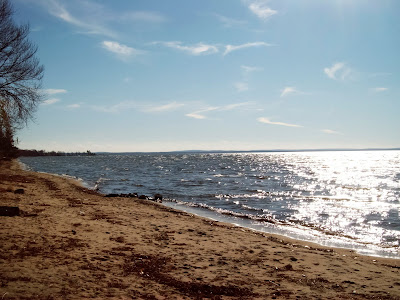 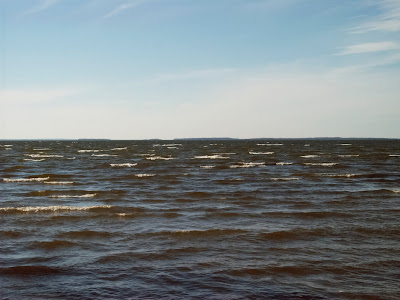 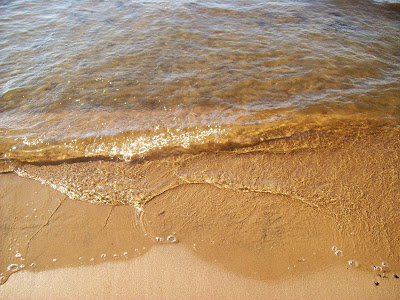 Slowly we have been making the yard ours and we have big plans for this small space {a post and photos to come eventually}. There are a lot of trees surrounding us, but not many on our actual property, so we put up our bird feeder in a temporary spot until we get one of those metal poles to put it on. All sorts of feathered and furry critters have been visiting, especially the chickadees. 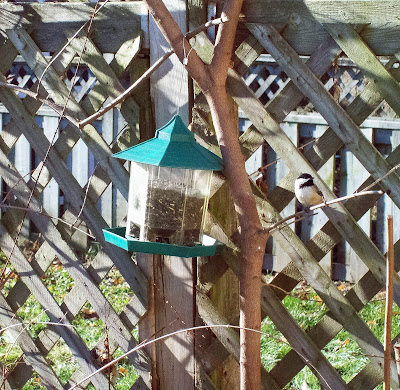 As busy as these last few weeks were, I have been making sure to take some time every day to make offerings and devotionals to the Ancestors. Below is a picture of our little Ancestral altar with some offerings around the 6th or 7th of November. 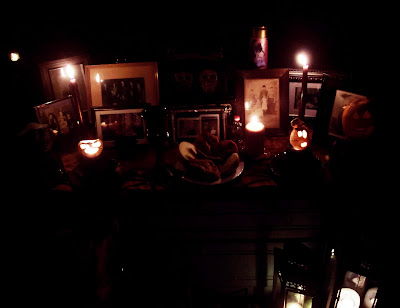 This is at the base of the altar. Pictured is last year's Parshell Cross prior to being burnt at our friend's bonfire shindig. 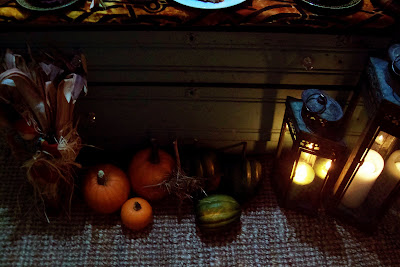 And as promised, another picture of a turnip Jack-o'-Lantern. It is looking rather sad after being on the altar for a few days. :*( 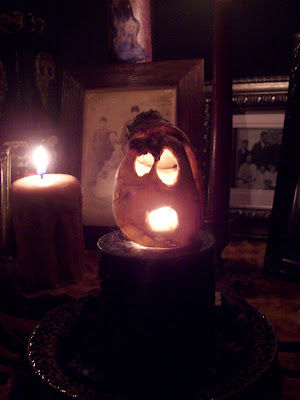 That is all for now. I have some book reviews, the 2011 garden overview and some other news coming down the pipe soon.

This Clucker Has Found Her Head {I Think!} 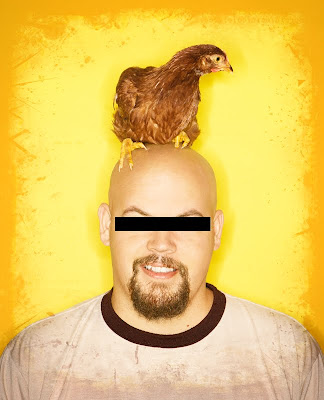 {tinkered royalty free photo}
When trying to take on too many things at once, it is inevitable that I will eventually be the proverbial chicken running with its head cut off. It might be great for a laugh for those around me who have mastered the skill of multitasking, but for me it is unproductive and eventually it all just falls to shit.

The only cure for this is a day off to breath and figure out what to tackle. Prioritize, or something like that. I took a few days just to be sure and am back on track.

So thanks to our readers for being patient for the lack of posts. I hope to be caught up soon! :)

I originally saw this trailer for Small Farm Rising over at the Cold Antler Farm blog. This looks like a pretty neat film and there are some great resources on the film's site as well.

Luverly of the Week: Morrigan by Morpheus Ravenna 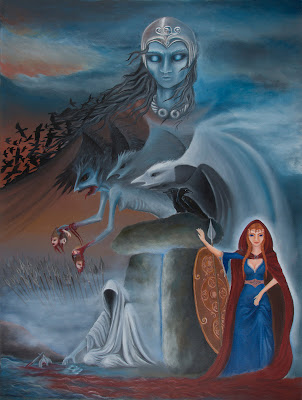 Morrigan by Morpheus Ravenna
I really like this depiction of The Morrígan. You can check out other pretties by Morpheus at her Etsy shop, Beansidhe Arts.

A few years ago a person I knew had passed on Witchcraft: Theory and Practice by Ly de Angeles to me because it was "too dark" for her. Given that it is a Llewellyn book I found that rather odd and I really didn't have much hope in it {yeah, I am one of those "snobs" who doesn't care too much for that publisher}. So, I just tucked it away and it has been pretty much gathering dust since.

Just before our last move I was going through my books and I had noticed on the back of this book that fith-fath and fetches were covered and I decided to give her a read.

I have never read anything by Ly de Angeles before and haven't heard too many bad things about her; in fact I have seen her on some BTW recommended reading lists. I've gotta say that I was surprised to see that her approach and attitude is not the typical "cursing is bad m'kay" that I have come to expect in Llewellyn books. That scored a point or two.

But then I came to the section on Fith-Fathing. It opens with:


"This is one of the best enchantments that you can use to acquire or affect--anything. A fith-fath is also called a poppet or a dolly, though it doesn't always look figure-like unless your spell is specifically aimed at affecting another person..."

Ummm, huh? Fith-fath is a poppet? She must have been drinking the same kool-aid as Alex Sanders because I fail to see how someone with {apparently} 30-plus years of experience can get shape-shifting and effigy-making confused with one another.

Then a few pages later she does the same thing with fetches:


"You make a fetch (like you make a fith-fath), but they are not a representative of humanity..."

I have heard fetches being anything from some type of guardian spirit to a visible projection of a shape-shifter, but never anything to do with fetishes or effigies {of course I could be wrong so please feel free to correct me if I am!}.

I have yet to finish the book and I suppose I will grit my teeth and plough through it eventually. It is possible that if this kind of shit didn't irritate me so much, I would probably say that the book isn't a shabby read, even though it is clearly for Wiccans and I am not one myself.


This kind of shit does irritate me to no end. Really, there is no excuse for published authors at this point to make such big fuck ups like this. I think it is safe to assume that they now have access to viable sources to do their research and that if they don't use them they are just lazy.

Spreading misinformation and profiting from it is just bad, m'kay? 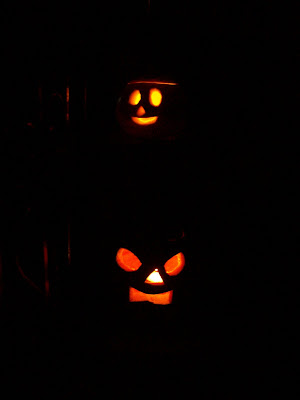 Not very skeery are they? ;) One is made from a buttercup squash, the other from a turnip. Pictures of our other Jack-o'-Lanterns and Samhain mischief to come.