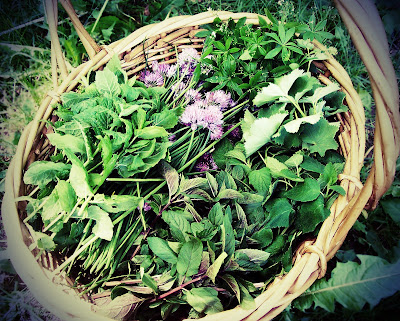 I think that this is the fourth season we have participated in the Growing Challenge {click here to see reports from other years and other posts on the topic}. I won't be mention every single thing we grew because I that would take more time than I have. All of herbs and perennials did great, which strikes a whole bunch off of the list. Below I think is just about everything else, although being as scattered as I am these days, I wouldn't be surprised if some were forgotten. As with other years I am doing the 1 to 5 rating system {1 lowest, 5 highest}. 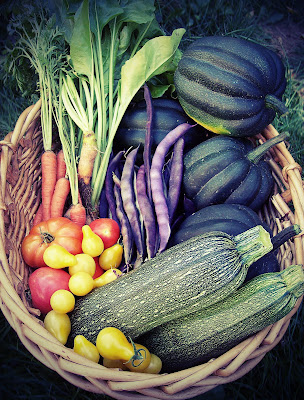 5. I am totally in love with the French climbing pole beans that we got from the luverly folks at Plant Trees, It's Self Defense and the Purple Mustache pole beans from Soggy Creek Seed Co! <3 Our Scarlet Runners did well too, the Contender bush beans were great as ever, and I really enjoyed Tanya's Pink Podded and the Blue Jay bush beans as well. Hopefully we will have room for them all next year in our new garden!

5. With our soil finally up to snuff, we could really enjoy beautiful big beets! The ones from Soggy Creek were especially happy. :)

4. Considering all the problems I have had with carrots on this property in the past, 4 might as well be a 10! This year's stars were the Atomic Reds & Cosmic Purples.

1. An epic fail. I am completely wet behind the ears when it comes to growing these. They barely even germinated.

5. Chard is usually reliable, but it was an especially great year for greens!

4. We didn't grow too many but the Lemons were very happy!

5. Both the Dinosaur and Red Russian grew from Spring to final harvest.

5. Our lettuces were especially bountiful this year. The Learn to Dance With from Soggy Creek I think could survive just about everything and the old faithfuls lived up to their station! ;)

2. They eventually grew but had no chance to fruit. Another first try for me. Maybe I'll have better luck in 2012.

4. There were some issues with loppers in late Spring, but were caught in time.

5. We have what seems a life time supply of nasturtium honey and poor man's capers thanks for the wonderful harvest.

4. Average harvest but no problems.

5. Peas for Peace were plentiful and the Devon peas were so pretty! :D

3.5 We love our Small Sugars, they are real troopers. Powdery mildew was more of an issue this year, otherwise it would have been a 4 or 5.

4. Come July when everyone else seemed to bolt, our Crop Circles stayed tender and sweet.

4. Some lopper issues but it kept on truckin' all Summer.

5. Real beauties that had an earlier start this year. The Russian Mammoths that our Devon friends sent us stole our hearts. :)

4. This was our first time growing tobacco {wild} so it was a learning experience. They did so much better in the ground than they did in big containers. Duly noted for next year!

5. What can I say? Our tomato plants ended up creating a wee jungle and had so much fruit. The Old Timers gained a spot in next year's garden and the Yellow Pears are still my favourite cherry tomato.

5. Hobo turnips are my favourite turnip ever and they make great Jack-o'-Lanterns. And some of the White Eggs ended up being the size of a baseball. :D

3. Most of our squashes got hit pretty hard by the powdery mildew which I think declined their fruiting potential. We still got crap loads, but not as much as previous years.

5. The only thing Strange about the Zucchini from Outer Space is how persistent it is. This stuff is darn prolific, darn tasty, and stands up to the nastiest powdery mildew. Next year I will make sure to give it plenty of more space because the plants like to take over!

Do not feel too bad about the melons because I haven't had much luck with them either. Your garden is still enviable!

You did grow a lot this year! I can't wait to see what you grow next year =^)