I have been doing more in depth studies of how Brehon Law handled land matters, including the the protection of trees and forest industry. Some of the sources I have seen mentioned are Bretha Comaithchesa {"The Judgement of Neighbourhood"} and Fidbretha {"Tree-Judgements"}. There are other areas that I find interesting, such as bee-keeping and land distribution, which I hope to cover as well.

There doesn't seem to be a lot of information on these topics, so if you have any suggestions of reputable sources or if any of the information I am posting here is flawed, please do let me know. I do hope that you all enjoy what I have found so far. 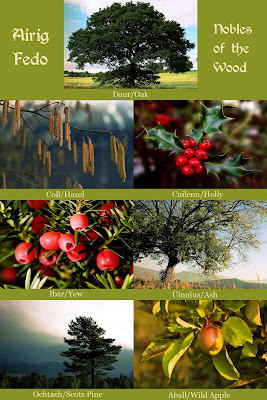 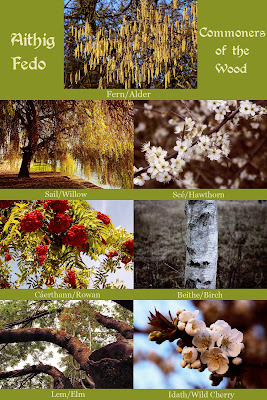 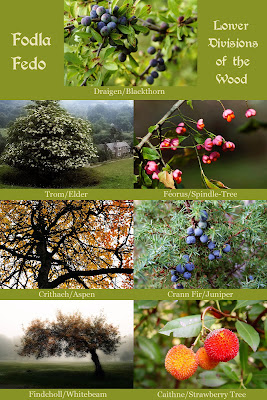 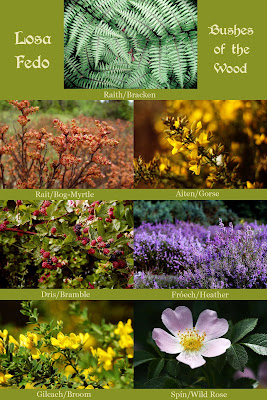 According to the article Trees in Ireland in Early Tradition and Place-names by Dr. Kay Muhr, the following features were the reasons for the chosen trees in the "Noble" class {six of the seven, there is no mention of Scots Pine}:

"oak for its acorns and nobility, hazel for nuts, apple for fruit and bark, yew for buildings, holly for chariot-axles, ash for weapons"

The seventh or eighth century poetic legal text Críth Gablach suggests that penalties for illegally cutting down trees or harming them in some other fashion differed, depending on which class the tree fell into. In the case of "Noble Trees", a person would be fined three cows for harming them, whereas with the "Common Trees" one is fined one cow for the same crime. A person could escape legal chastisement though for collecting a "single cauldron's cooking-wood" or a "handful of ripe nuts".

I have seen other supposed penalties mentioned floating around the web such as a person who illegally cuts down one of the "Noble Trees" facing the same punishment as if they killed a chieftain {from the Living Tree Educational Foundation}; in this Yahoo! group there are various penalties mentioned for harming Oaks which seems to originate from Fergus Kelly's article The Old Irish Tree-List {I linked to part of the article above, but I do not know of a link to the full article}.

Again, please feel free to correct me or let me know of any other sources to explore.

This is great I look forward to seeing more. I thought that blackthorn was one of the noble trees?

That is great info. I am trying to find out more about trees in The Netherlands.
I have an ash in my back garden, but I domn't know if it has grown here for long.
Greetings from The Netherlands.

Hellow.
It's a very interesting; thanks for the information.
I am writing a study about nature in medieval Irish and I need your help. I wonder know what is the plant which appears dranw in the Book of Kells: http://growingtogethernewhaven.org/files/2012/12/kells1-300x228.gif or in http://gaukartifact.com/wp-content/uploads/2013/03/425a_BookOfKells_ETBD-750x659.jpg
I think it would be one of the plants which you put in your blog, because that plant would be very important.
Thanks.